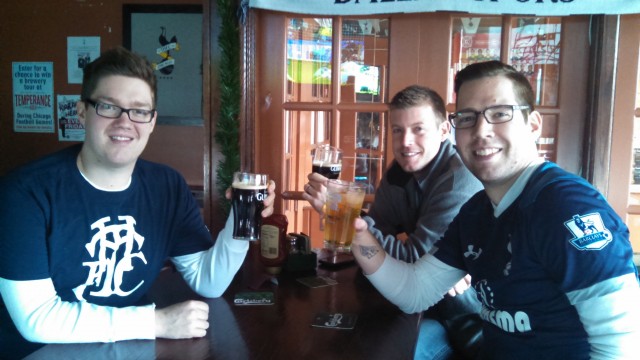 A few years ago Eric went through a very arduous vetting process to choose an English premier league club to support. Spurs were favorites from the jump and ended up winning in the end. Eric joked that no one should ever say Spurs haven’t won anything recently.

Eric’s favorite Spurs player is Roberto Soldado. He says that Spurs overpaid for Soldado and he has been bad. Eric however says that Soldado will come good and 2015 will be his year.

When asked what Eric’s fondest Spurs moment was, he said it was Clint Dempsey’s goal vs Man Utd, in the snow, against a good Man Utd team.

Eric reckons Chicago Spurs is the best. We tend to agree Eric.

Eric is pictured with brother Cory and friend Jeff.